The IV range segment is probably the one in which product innovation has had the greatest room for expansion in recent years. It was not an easy path, from the first appearances in the refrigerated counters of large retailers to today, the category had to work hard to get to the refrigerators of Italian homes.

In less than twenty years, the IV range started from nothing to cover, today, more than 2% of the purchases by volume of Italian families. A percentage that, at first glance, may not be high, but takes on decidedly superior contours when we discover that in the recent 2020 “ready salads” alone covered 31% of the total salads purchased for domestic consumption. This is what emerges thanks to the CSO Italy processing of the data from the GfK Italia family panel.

Therefore, by restricting the field of analysis to fresh-cut salads only, which are the majority component of the category, we can extract other interesting information, for example, in the last year at our disposal, 76.8% of families have purchased at least once. within 12 months a reference of “ready to eat” salad. 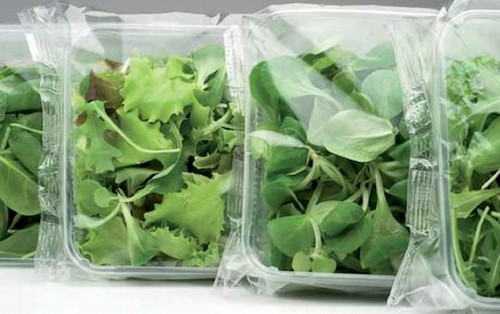 Overall, the volume purchased in 2020 was 85 thousand tons, a slightly lower amount than the previous 2019, a contraction mainly caused by the months of the stay home, when on average in the month-on-month comparison the shortfall was -10%.

Already in the second half of 2020, fresh-cut salads showed a good recovery in sales which, however, was not enough to end the year with the plus sign. This first half of 2021 sees the trend of the previous six months continue with a partial + 18% in quantity. Barring colossal debacles, the IV range salads should close 2020 with a decidedly positive balance.

Inside the salads we find two macro aggregates, that of the “simple” ones composed of a single leaf species and the mixed ones where, in addition to a mix of lettuce and endives, there are also other ingredients, both vegetable and not. The first, the simple ones, show a penetration index that exceeds 68% and an overall volume of about 39 thousand tons for 2020, while for mixed products the penetration is 59% of households and a volume of 46 thousand tons.

When it comes to IV range, the subdivision of purchases by commercial channel is limited to large-scale distribution which manages to maintain the cold chain from production to the customer’s cart: specifically, 54% of purchases take place at a supermarket, 11% in a hypermarket 3% in supermarkets and finally around 31% in discount stores. Precisely in the latter, also due to the limited segmentation, the average purchase price is the lowest with 5.06 € / kg, followed by supermarkets with 7 € / kg, hypermarkets at 7.13 € / kg and superettes at 7.58 € / kg on average.

It is families made up of 1 to 3 individuals who centralize the most important shares of fresh-cut salads with 78% of the total and, contrary to what we might think, the over 65s are the purchasing managers who purchase the highest volumes of references with 29% of the total (it is important to underline that they are also the most populous age group among purchasing managers).

In small steps, fresh-cut salads are carving out a niche in the organic sector, currently covering 2.2% of the total. This rise was partly held back by the average price element which is positioned at € 9.54 / kg, + 66% compared to the conventional counterpart.

The high segmentation of the product, with the possibility of new mixes, and innovation, also in the field of packaging, are the paths that the manufacturing companies are currently following. Thanks to the wind from the consumer, the sector will most likely have some surprises in store for us for the future.